Giving in Your Workplace Couldn't Be Easier! 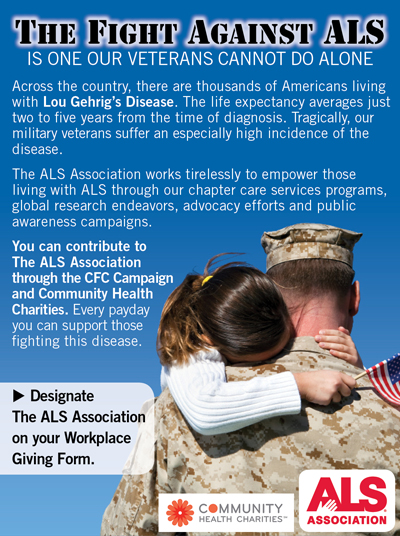 For more than half a century, Community Health Charities (CHC), recently renamed Creating Healthier Communities, has represented the most well-respected health charities in our country. These charities, of which The ALS Association Golden West Chapter is a proud member, must meet stringent criteria in order to be accepted, ensuring a cost effective partnership that enhances the ability to deliver more of every dollar donated into the hands of those who desperately need it. Through its nationwide network of 36 affiliate offices, CHC effectively connects the American workplace to credible charities focused on addressing our nation’s most pressing health issues.

Workplace Giving is an easy way to support The ALS Association Golden West Chapter. Your gift supports patient service programs in thirty-one counties in California  and the state of Hawaii and more than 90 research projects throughout the world. Giving at work through payroll deductions is simple and there are many convenient ways to contribute.

As a member of Community Health Charities of California (CHCC), we are one of the voluntary health agencies participating in the Combined Federal Campaign (CFC) and California State Employees Charitable Campaign (CSECC).

Federal and state employees and members of the military are encouraged to participate in the CFC and CSECC and may designate  The ALS Association Golden West Chapter by writing it on the Workplace Giving Form.

For your convenience, please use these codes:

Making Your Gift through the United Way

If your company participates in the United Way Campaign, you can still designate your contribution to The ALS Association Golden West Chapter. All you need to do to support our Chapter is designate your pledge through United Way's Donor Choice Program by following these simple instructions:

If your company has an employee matching gift program, you could double or possibly triple the impact of your gift to The ALS Association Golden West Chapter.  To find out if your company will match gifts, please follow the link below:

After you complete the form, send it to us at the following address:
The ALS Association Golden West Chapter
PO Box 565
Agoura Hills, CA 91376